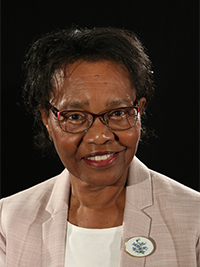 Rev. Benita Rollins considers herself a product of the church and of the military. She received much of her education near and on Air Force bases from California to Omaha, NE; from Madrid, Spain to Minot, ND.

She began her career as a school teacher, first in California and then in the Cleveland Municipal School District. While teaching in Cleveland, she became active in church life at Windermere United Methodist Church.

After earning a Master of Divinity from Methodist Theological School in Ohio, Rollins’ first appointment was at Indianola UMC, where she served eight years. She went on to serve three years as associate pastor at Church of the Savior UMC before beginning her first term on the cabinet as superintendent of the then Youngstown District in 1993.

Prior to being re-appointed to the cabinet in 2012, Rollins served first as pastor at Aldersgate UMC and then at Delaware Asbury UMC before joining Methodist Theological School in Ohio as director of alumni and church relations.